Our office is open and we are abiding by CDC guidelines to continue to serve you. 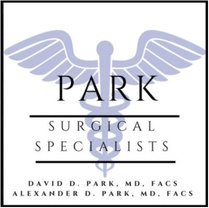 Doctors Alex and David Park are brothers. Both are board certified general surgeons who are dedicated to providing their patients with personalized, compassionate, and excellent surgical care. After practicing together for a combined 45 years with a large, multi-surgery general surgery practice, they felt compelled to launch a more personalized general surgery practice that is quality driven and cost efficient. They subsequently left the large practice and established Park Surgical Specialists, LLC in February of 2018.

Dr. Alex Park graduated from the University of Missouri - Kansas City School of Medicine with a combined M.D./B.A. degree in 1991 at the age of 23. He graduated with honors and was vice president of the Alpha Omega Alpha honor medical society. He completed general surgery residency at the University of Maryland Medical Center in Baltimore, Maryland in 1997. Since then, Dr. Park has been in private practice in the Atlanta area.

Dr. Park is board certified in general surgery and is also a Fellow of the American College of Surgeons (FACS). He is a member of the American Society of Breast Surgeons, Society of American Gastrointestinal and Endoscopic Surgeons, Georgia Surgical Society, and Medical Association of Georgia among others.

His particular area of interest and expertise is breast cancer. Dr. Park has wide breadth of knowledge and expertise in the latest innovative treatment options of breast cancer including minimally invasive breast biopsy techniques, breast conservation surgery, sentinel lymph node biopsy, and partial breast radiation treatment. Breast cancer patients in his practice have the opportunity to be enrolled in various national clinical trials for the latest treatment options. Other areas of expertise include advanced laparoscopic surgery, gastrointestinal surgery, and endocrine surgery. He is an active staff member at Emory Johns Creek Hospital.

Dr. Park is married and lives in Atlanta with his wife and children.

Dr. David Park received his Bachelor of Arts in Biology and his Doctor of Medicine in an accelerated, combined BA/MD program at the University of Missouri - Kansas City, graduating with honors in 1988. In 1987, Dr. Park completed a fellowship at the Mid-America Heart Institute at St. Luke’s Hospital, where he conducted clinical cardiovascular research which was presented at the annual American College of Cardiology meeting in spring of 1988.

Both a curator and university scholar, Dr. Park also received recognition for "Outstanding Achievement in the College of Arts and Sciences." Dr. Park completed his general surgery residency training at Emory University, serving as resident general surgeon from 1988 to 1992 and chief resident surgeon from 1992 to 1993. He has been in private practice in general surgery since 1993. He has a special interest in hernias, advanced laparoscopic surgeries, thyroid and parathyroid diseases.

Dr. Park and his wife have six children, including one son-in-law. He is an active member of Perimeter Church in Johns Creek.